Look what came in the mail ... 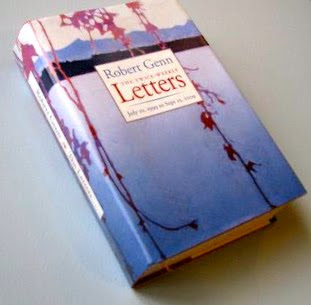 Day before yesterday, the mail-man brought me a wonderful book. Its a huge book. The book measures 9" x 6" x 2". It is written in columns like a newspaper. It's ten years of over a thousand unabridged letters ... including an 82 page index. The book measures 9" x 6" x 2". Robert Genn sends out e-mail letters twice a-week, full of advise and inspiration. I have been a subscriber to his twice weekly letters for about 6 years and have never regreted it. You can subscribe to Roberts Genn's Twice Weekly Newsletters by following this link. If you don't already subscribe, give it a try.
Posted by Nancy Van Blaricom at 8:22 AM 1 comment:

a tale of two hales

To the left, my small thumbnail
marker pen value sketch of Ellen
Hale's "Morning News" from the
magazine article. 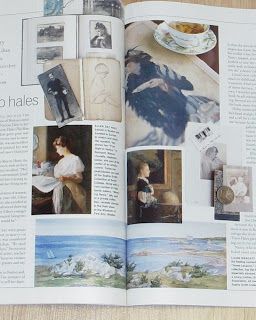 In this Victoria magazine article, February 2002, the author Claire Whitcomb tells of two sisters-in-law, that were pursuing careers as professional artists. Ellen and Lilian Hale.
Ellen was born 1855 into one of Boston's most prominent families. Her father was the author and clergyman Edward Everett Hale and the grand niece of Harriet of Harriet Beecher Stow. Her mother encouraged Ellen and her seven brothers (in particular Philip) to draw. She later assisted Philip with his career as an artist.
In the 1870's she studied with William Morris Hunt, the city's foremost painter, who took on forty female pupils. Ellen finished her training in Paris, exhibited to critical acclaim and made her living as an artist until she died in 1940.
She paved the way for a second wave of women , among them a twenty year old, Lilian Westcott. Lilian was from Hartford Connecticut, and enrolled at Boston's Museum School in 1900, taking advanced drawing and skipping a class taught by Ellen's younger brother Philip Hale. She would recall later "I always took it for granted, being successful, I assumed I would be."
So did Philip Hale who courted her. Lilian did not want to marry and mix her art with marriage, but Philip persisted. He was 17 years her senior, an accomplished artist, teacher and critic. He is quoted, telling her, "We shall have you a great painter one of these days". They married in 1902 and had adjoining studios in Boston. In 1908 a daughter, Nancy, was born. When people would admire his paintings he would say "wait until you see Mrs. Hale's pictures.
Lilian's best subject was her daughter. Nancy was quoted as saying "I had to pose so much in childhood that when I reached the age of about 13 I finally figured out a requirement of my own. I wouldn't pose, I said, unless I could be painted with a book. So all subsequent picture pictures show me in the act of reading. Several are silhouetted against a window: some show the book, some don't but have the eyes downcast".
Philip continued to paint and teach in Boston. Once home he's go straight to Lilian's studio, receive a kiss and a call for a critique. He was needed in her career because of his unwavering vision of her as "the loveliest and noblest and most talented creature that ever was." When she was exhausted from jelly making, Phillip fussed. "The only thing my father ever wanted my mother to do was paint," wrote Nancy.
Having Ellen in the family and as a very important role model, it seemed that being a woman and an artist was not unusual. When Philip died unexpectedly in 1931, he was 65, she was 49 and forlorn. After 5 unhappy and lost years she came around and mounted a solo show. It was not well received. Modernism had set in. She never contemplated another solo exhibition but continued drawing. She would have Nancy's children sit for her. In 1963, before he death at 83, she won her final prize for a charcoal of a young girl given by Rockport Art Association.
The article ends with a wonderful quote from 1900, painter Anna Lea Merritt, The chief obstacle to a woman's success is that she can never have a wife." ~ Don't you love that quote? ~
The author goes one to say Lilian and Ellen Hale managed just the same.
If you enjoyed reading about these two, you may also enjoy reading Women Artists in Boston 1870-1940; Women Artists in Boston 1870-1940 by Erica E. Hirshler
In this article I think we once again see very confident women artists surrounded by support.
Posted by Nancy Van Blaricom at 12:15 PM 1 comment: 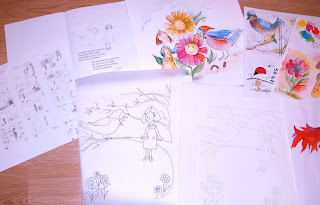 Now that the holidays are behind us I'm once again able to center my attention on the children's book I am illustrating. There are so many steps to making a book. Picture sequence, storyboard and book dummy, size, scale and shape, all need to be considered.
In the photo above you can see my story board to the upper left ..... small thumbnails of the sequence of the book, then to the right of this a dummy book a sketch of what you think the page may look like. You can see numerous watercolor sketches I've done, then on the bottom row, you see my drawing on tracing paper and to the right of that my finished drawing on watercolor paper. I haven't given myself a deadline, but I am looking forward to seeing this project completed.
Posted by Nancy Van Blaricom at 10:22 AM 5 comments: 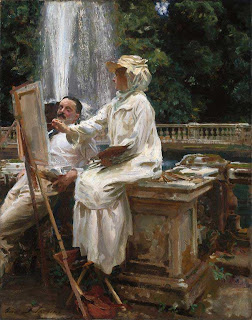 John Singer Sargent's The Fountain, Villa Torlonia, Frascati, Italy
This is a painting of Jane while she is sitting straight-backed at her easel beside her husband at the fountain.
The magazine article from the Victoria April 1993 magazine was titled The Eminent Emmets. In this article they are talking about a 19th-century family of five cousins - two sets of sisters. The first set of Emmet sisters to achieve fame was Rosina, (born in 1854), Lydia and Jane - raised in New York by their mother who had been formally trained as a painter. The article says that "To be an Emmet meant to be a creative woman." The second set of sisters, cousins, Ellen and Leslie, raised in San Francisco - they had no known role models. "yet when they moved to New York at the ages of nine and seven, their talent, especially Ellen's was discernible.
In the depth of the depression, the article goes on to say, two of the cousins earned salaries of $70,000 (yes you read that correct). Rosina was 23 years older than the youngest and was the one who blazed the path for them all. Rosina, in her mid-twenties had serious training in New York with American Impressionist William Merrit Chase in his Tenth Street Studio. She almost immediately began to earn money with her illustrations, such as a $1,000 prize for a Christmas card design.
When Lydia, who was eleven years younger than Rosina, was eighteen, Rosina took her to Paris where they both studied. When Lydia came back to New York, she took Ellen, her cousin, then fourteen and enrolled her in the Art Student's League. Later returning to Paris she took Ellen and supported them both in their studies, later making sure Jane came to stay with them.
Ellen and Leslie spent three years in Paris in the atelier of Frederic MacMonnies. John Singer Sargent told her cousin Henry James that she had more talent for her age than any man or woman he had seen.
They seemed to have a wonderful support system for each other. Ellen wrote to Leslie in Paris when she'd gone off to England to earn additional resources for their studies by painting portraits, "Do not stint yourself for paint or bread". When Ellen and Leslie's step father abandoned the family, Lydia offered to help raise funds. Ellen wrote saying "we can get along as long as I have ten good fingers".
None of the cousins were competitive with each other as their strengths went in different directions. Ellen was great at portraits, Lydia was famous for her "woman's touch" (not sue what that means) If Ellen painted husbands of the day, Lydia painted the wives and children.
Jane moved to England where she had moved to marry John Singer Sargent's best friend, artist Wilfrid de Glehn.
Indeed, "The Eminent Emmets".
After reading about these amazing cousins I was surprised that I hadn't heard of them before. I'm assuming I probably had and just forgot. Also, I was shocked at the amount of money these woman were earning from their art during that time. And I loved the fact that they helped each other both morally and financially. I wonder could we all succeed with this kind of support? 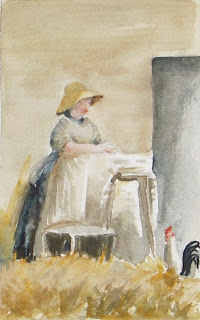 This is my sketch of a painting found in a scrapbook of Lydia's.
Below is her painting. She was able to achieve such depth in this simple little painting. 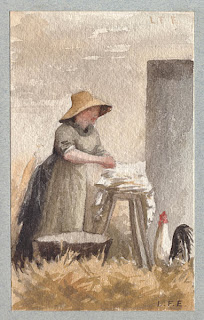 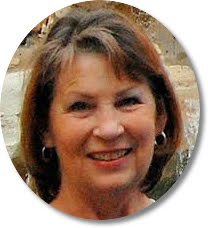